Increasing Your Odds at Shed Hunting with Trail Cameras

Deer hunting season has ended but another season is just starting. This season has tremendous interest right now, making it a sport all of its own. We are talking about shed hunting and its season is starting right now.

Whitetail deer sheds command huge paydays for those that find large and unique racks and are willing to part with them. More so, shed hunting has moved from a hobby, or an accidental encounter to the weekend hunter, to a necessity as more landowners take deer management seriously on their properties. Sheds also make for a nice trophy on the wall of that buck you have chased all season and expended time and resources for, even if you were unable to harvest him. Sheds also provide a record of what bucks have made it through and some information on what this season may potentially yield.

The Biology behind Antler Shedding

To understand antler shedding, we have to start with some groundwork on what buck antlers are. Antlers are composed of bone-like tissue that starts developing in early spring. The growth phase of antler development, which goes from early summer until fall, is where a buck’s antlers are covered in a soft membrane referred to as velvet. This velvet is a layer of nutrient rich blood vessels that supplies the resources needed to build the antler mass. The nutrients, such as amino acids, minerals, proteins and others, are what many hunters and landowners try to supplement throughout the summer to promote this growth and thus yield bigger antlers. Antlers will growth rapidly for two to four months. As fall approaches, due to photoperiods, the levels of testosterone start to increase. The increase in testosterone constricts the blood vessels around the antlers and eventually causes it to die. Remaining velvet falls off or more typically is rubbed off as a buck begins to prepare for the rut. What are left are the hardened antlers we are so interested in during deer season. Antlers stay with a buck until about the middle of winter then they drop off. This antler growth process is repeated each year for the buck’s entire life.

The antler shedding (casting) part of this cycle brings us to the biology behind shedding. The process, both the growth and casting of antlers, is controlled by photoperiods and testosterone. However, there are many factors that lead to either early antler drop or late drop such as injury and social stress. Often times these factors do not hold a significant role, which is why the shedding process happens generally the same time of year each year. The main for this again is the amount of light, or photoperiod, available at a given point in the year. During antler growth, testosterone levels rise (antler growth) towards a peak (loss of velvet) and eventually decline into as winter sets in, which signals the physiological response of antler shedding. To complete the cycle, daylight starts to increase as spring and early summer arrives and bucks begin their new antler growth.

When Do Deer Shed Their Antlers?

Traditionally, shed hunting season starts in February and wraps up around the end of March. Certainly, sheds can be found throughout the year and usually can be picked up during spring gobbler season if the rodents have not consumed them all yet. However, the main focus of shed hunting is in these two months.

While testosterone is the main factor controlling antler drop, there are several factors that can have an impact on how these testosterone levels can change. The stress put on a buck from environmental conditions such as extreme winter weather and also contributing factors like poor nutrition or injury can all lead to lower levels of testosterone and accordingly expedite the timing of when bucks shed antlers. 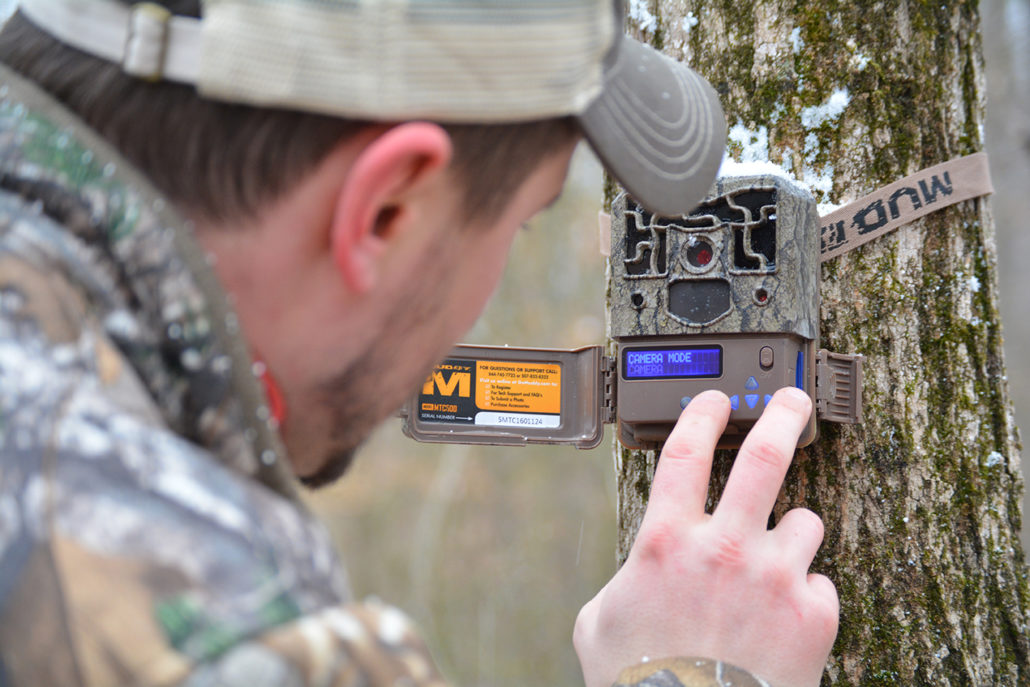 Bucks that shed their antlers earlier than February are typically more mature, dominant bucks. These bucks are apt to shed early because their dominance gets them more involved in the rut earlier and for a longer period of time than younger, less mature bucks. Due to this, they can be left depleted after the rut and stressed to a point where antler loss happens earlier than other bucks in a region.

Conversely, late antler drop can be influenced by several different causes. First, unbalanced deer populations can create an atmosphere where some does do not get bred during the peak of the rut. In these highly skewed deer populations, does are being bred during the second rut and beyond. Bucks hold their testosterone levels up in these areas, which leads to them delaying the shedding of their antlers until late March or April. Second, first-year fawns that reach breeding weight their first winter will come into estrous. This usually happens well after the peak rut and is the main driver of the second rut in many places. Again, situations like these will keep bucks high in testosterone longer, delaying the shedding process. Finally, high levels of competition for does can cause late antler shedding. Mature bucks that have to spare more frequently to breed does produce more testosterone, which results in a later loss of antlers.

Reasons to be Shed Hunting This Year

Besides the fact that finding sheds can be profitable if you are good at it, there are other reasons to be shed hunting this year. First, finding shed antlers can give you some information about the buck that carried them. The most obvious fact is that he is still alive. Sure, a buck that shed those antlers may still have a misfortune in the coming months but making it past hunting season is the biggest challenge. Aside from car collisions and a disease outbreak, the odds are pretty good whatever buck left those antlers will be around come next season.

In contrast, dropped antlers do not always connect to that buck living in the area. Finding a shed clearly shows that a buck has passed through here but depending on food availability, weather conditions and other factors, he may or may not be a resident buck. In areas with high-quality forage and lots of it, bucks stick around. The opposite is true when harsh winters reduce food sources and poor habitats that make bucks more transient. This is where post season scouting for deer is important. Finding a shed can help you focus post season scouting on potential hunting spots for next year. Second, spending time shed hunting is important for deer management on a property. Those that shed hunt religiously can start to put together the growth trajectory of individual bucks. Finding the same buck’s sheds year after year can piece together what he may look like this coming year. Growth rates will vary each year but by scoring an antler shed, even just one side, and comparing that score to last year’s shed of the same buck can give you an average growth rate. This is an advantage in compiling, albeit early, a hit list for the upcoming season.

The Big Question | When to Start Shed Hunting on Your Property?

Since we are on the precipice of shed hunting 2017, when can you be sure it is time to venture out and look for sheds on your property? The best way to decide when to go shed hunting is to use trail cameras.

Trail cameras provide a means to monitor the timing of antler drop in your area. You can use cameras to pinpoint when most of the bucks have dropped their horns. Also, trail cameras can track a specific buck to find that white gold set that eluded you during hunting season. With trail cameras, you can scout an entire property and even multiple properties quickly and determine when to go shed hunting makes sense.

Shed hunting success is all about coverage. The more miles you put on the ground the greatest chance you will stumble across shed antlers. Trail cameras, however, can save you valuable time. When to shed hunt should be based on when the majority of bucks have started dropping. Use your cameras to identify when about 50% of bucks have lost their horns. Your odds of finding sheds will be much greater when you know most bucks have lost their horns.

Similar to why you should be shed hunting, post season trail camera surveys are a way to find out what is the overall status of the deer herd in your area. The most efficient way to accomplish this is by running a trail camera survey. A post season trail camera survey provides more valuable information than summer trail camera surveys. Results with surveys this time of year can be used for determining population estimates, age structure, sex ratios and herd health after the hunting season. All of which drive what management actions are needed this year.

The differences between a post season trail camera survey and using trail cameras for shed hunting are how the cameras are setup. Food sources are key areas for deer in winter and one of the best places to shed hunt. Even though bucks are moving less and relying on fat reserves, they still seek out places that have late season forage. Food sources like standing corn, beans and winter food plots will all be attracting deer. Deploy trail cameras on main deer trails coming to these spots to capture bucks as they shed their antlers. If there are no remaining agricultural food sources, do not give up. The main part of a deer’s diet in winter is woody browse. Use deer sign like tracks and scat to pick out these areas as potential spots for trail cameras and ultimately shed hunting.

The trails leading to food sources are likely coming from bedding areas. If you are trying to determine where to find sheds, start with bedding areas. Bedding areas are providing cover and security in winter. Bucks will spend most of their day in these areas. Southern slopes with thermal cover and easy access to food sources outlined above are perfect locations to place trail cameras and hunting for sheds. Putting It All Together

There are numerous shed hunting tips out there but it really comes down to dedicating yourself to shed hunting. It is a combination of an art and a science. The art is taking your time, covering ground and being able to pick out even the slightest protruding part of an antler on the ground. Where the science comes in is using trail cameras to time the shed hunting season and to isolate the most likely places bucks are hanging out in winter. Combining these two will put more antlers in your pack and support your management decisions this season.

When do whitetail deer shed antlers? It is happening right now! There are some people out there that are naturals at shed hunting. If you are like most, however, you need some help when it comes to shed hunting season. It is ok to hike through the woods in the hope that you will find sheds, but a better approach is to have a plan. Using trail cameras to identify when to start shed hunting and areas that bucks are frequenting will vastly improve your odds when it comes to searching for white gold. 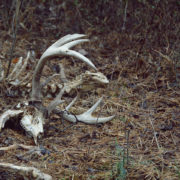 Shed Hunting | The Pros and Cons of Finding “Dead Heads”