Which Camera to Buy for Filming Deer Hunts | How to Film Your Own Deer Hunt: Part 1

Filming whitetail hunts is becoming more popular each and every year. Whether it is dreaming to become a professional hunter, have a career in the outdoor industry, or just the want to record your own deer hunts for friends and family, buying film gear and hauling it up in the tree stand is a growing trend. While this industry plunges further into multimedia use, video use, and web/TV show content, not a whole lot of information is available on filming your own deer hunting. Fortunately there are some great articles, videos, resources and advice out there if you look for them hard enough. Luckily for you, you happened to stumble upon this series. Part 1 of this series on how to film your own deer hunt, will deal with the actual cameras themselves, and the most important question…”which camera to buy for filming deer hunts?”.

The topic of filming deer hunting is expansive and never ending, mostly because there are so many different levels of filming. From amateurs to ProStaff members, and TV show quality to creative agencies and videographers, certain advice does not pertain to all hunters taking a video camera to the woods. If you are looking up which camera to buy for filming deer hunts you most likely are just getting into filming, or trying to touch up on your gear and skills before going to the next step in your career. For that level of filming, we have compiled some helpful information.

By far the most important aspect of filming a whitetail hunt is the cameras and camera gear itself. It is the main tool for the job. While there are many parts, gears, and critical tools that go along with filming such as tripods, fluid heads, and hunting camera arms, the camera itself is what really matters first off.

How to Film Your Own Deer Hunts | Which Camera To Buy

(Video) Are you looking for a detailed video on how to film your own deer hunt? Here are the basics of filming deer hunts, including which camera to buy for filming whitetails.

Overall there are 3 cameras to potentially get or put in your hunting pack. The camcorder, the DSLR, and the action camera.

Camcorders really are the backbone of filming deer hunts. As far as entry level camera gear general advice tries to stick around the $600-$1,200 range. In this category and for the price most hunters shoot for the Canon Vixia HF G10, 20, 30, or G40. Using a camcorder allows the hunter to dial there filming skills in early. Using a camcorder such as the G30 with a Varizoom remote allows a hunter to very easily self-film a hunt. This is especially true when a hunter is bow hunting and trying to self-film. The Cannon Vixia HF G series cameras will off you a very reliable and basic camera for filming whitetail hunts.

The other aspect to filming hunts is housing them somewhere. Once you have successfully filmed a hunt you will most likely upload the hunt to YouTube, or on a web show/ outdoor brands website. Purchasing a DSLR will make this easier for you. This camera will not only supply you with a good overall camera to have around for hero shots, or for documenting memories with the family but can be used as a reliable camera for filming hunts. DSLRs, when used correctly can offer a hunter more options for dialing the camera in perfect for stunning time-lapses, B-roll footage, and very clear focused hunting footage. 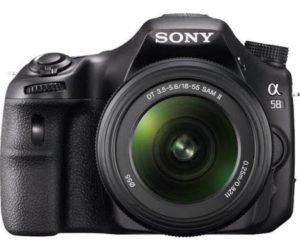 When it comes to actually buying a DSLR, so many options are available. Cannon and Sony seem to be by far the leaders in this industry, both offering DSLRs from $600-$1,700 that will do a fine job of filming whitetail hunts.

Anyone that has ever watched hunting shows, or hunting videos, or has dipped their feet into actually filming a whitetail hunt knows an action camera is a critical camera to buy for filming deer hunts. The ease and simplicity of the action camera allows a hunter to capture every second and detail of the hunt. This footage, while it is not as professional as the DSLR or Camcorder footage, helps tell the story and fill in the missing footage of the bigger cameras. It also can get great angles and footage that are unique to your style of hunting or filming. The GoPro is the obvious choice here but many other companies have made small action cameras cheap and available for hunters even on the lowest budget. The one warning we can give here is to not use an action camera to film your entire hunt. At most a viewer will only be able to see the outline of a deer, maybe your arrow or your gun firing, and the brown dot (deer) run off. An action camera should be used to film the second angle of the hunt, or some downright cool and creative b-roll shots! This is a beginner’s introduction into which camera to buy for filming deer hunts. If you are looking for more detailed content on other gear to use when filming deer hunts, or specific information, advice and tips on filming, don’t worry it is on its way. Look out in the near future for more blogs and videos on our Get Muddy Blog. The next segments will cover camera gear considerations for purchase, including one of the most important pieces of film equipment pertaining to whitetails, the camera arm.