Like them, love them, or hate them cell cameras are now one of the most popular pieces of hunting gear in the industry.  I have been a trail cam addict for over ten years now and have used just about every brand out there.  A few years ago, I started using a few cell cameras and I have seen great improvements in the technology in just a few short years.  None has impressed me more than the Muddy Morph! Like most hunters, I like to be off the grid as much as possible when it comes to hunting.  These remote areas typically lack the most vital part of the cellular camera technology, cell service.  This was the major issue I had when cell cameras first came out.  It did not matter what camera I tried; I could not get cell reception at my home farm.  That was until I found the Muddy Morph cellular trail camera.

I am so impressed with the Morph’s ability to take and send me trail camera photos in an area where I have no cell service on my cell phone.  I had even went as far as buying an extended range 15-foot antenna to connect to other cell cameras in this same location and still had ZERO service.  The Muddy Morph sends me pictures from this same location with the antenna it came with! This is truly a game changer. The Morph’s gift to send images in such a poor cell service area is, to me, the most important feature a cell camera can have but do not let it overshadow its other awesome qualities.  The Morph takes amazing pictures and video too!  It has up to 26-megapixel photos and 1080P high-definition video capabilities.

Trigger speed is also not an issue for the Morph.  I have countless photos of birds caught in mid-flight.  So, no more frustrating series of photos of empty pictures or just the rear end of a deer. The detection range is an impressive 100 feet day and night, and I believe it.  The Morph takes clear daylight photos and with 42 LEDs and the “No Glare” technology, nighttime photos are just as great. Finally, the set up and monitoring of the Morph could not be easier.  Using the quick scan QR Code on the inside cover, simply scan with your smartphone and follow the prompts.  The Stealth Command App keeps my photos organized and I can use the handy filter settings to go back and review the photos.  In addition, using the app I can easily change the settings on the camera with just a few clicks! If you cannot tell, I am a huge fan of the Muddy Morph.  I will definitely be adding more of these to my arsenal of cell cams in the near future.  I suggest you do the same.  HERE is a direct link to check them out for yourself.  You will not be disappointed! 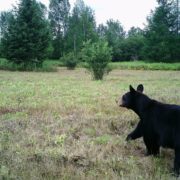 Must Have Tree Stand Accessories 5 Reasons To Use A Ground Blind When Deer Hunting Tips And Tricks for Bowhunting in A Ground Blind Setting the Stage and Sealing the Deal
Scroll to top