The trees have shed their leaves, and now a cold, gray, and bleak look has overtaken the once beautiful, burnt orange woods. The arrival of grim, dull, and cold days may seem like an awful end to your already painful deer season, however, you shouldn’t throw the towel just yet. While the rest of the season may look pretty bleak, late season deer hunting can actually be laden with opportunities. This blog will help you prepare for the late season before it ramps up to its full potential.

What is the Late Season?

When the intense action of the rut subsides we are left with a long drawn out period of desperation. A buck’s reserves are depleted, they are slim after the energy loss of the rut giving them a strong need and urge to find a reliable resource. After November, when the cold temperatures of December and January hit this late season period begins. The number one thing on everyone’s mind (both hunters and deer) is food.

So what are the late season food sources that you should look out for?

Once you identify and find a late season food source on your property, then it is time for the next step in preparation…setting up your trail cameras.

Your biggest concern before the best days of the late season arrive should be your trail cameras. Cold temps force deer to hit food early in the afternoons, which can bring mature bucks out in daylight. This daily pattern once the cold temperatures arrive and stay can become one of the best opportunities of the year at a mature buck. But not without the help of trail cameras. This is the week to change up your trail camera strategy, setup new camera spots and adjust the settings from rut focused to late season focused. With food being the focus our trail camera tips take the form of what they were during the early season… check out the trail camera tips below to dial in on a mature buck’s pattern.

The first and most dependable is the time-lapse function on a trail camera. For this function you want to have a camera with great quality, the Muddy Pro Cam 12s have 12-megapixel images so they work great for the late season.

Setup: To hang the camera you simply hang the camera where it can clearly see the whole field. You want a good vantage and one very important tip is not facing the setting sun

Settings: For the settings on the camera you want to have the function set to the last 1-2 hours of daylight and a photo every 30 seconds to a minute. Make sure you have a big memory card, a 16gb will do fine.

Notes: By doing this, it allows you to survey how many, and which deer are using the food source during legal hunting times, and it also can help you pinpoint mature bucks patterns…and where to hang the second camera for late season Intel!

By identifying the bedding area and looking at the topography, in consideration to the food source you will be able to clearly see where the most traffic is coming into and out of the field. By setting a game camera on these late season funnels, and using the same setup and settings as we did during the rut, we can more easily track a buck’s movement.

Setup: Set the trail camera up at a 45-degree angle from the run or funnel.

Settings: A long video mode, or 6-8 photo burst with a short 10-second delay

Notes: This setup gives you intel during the night, which the time-lapse function does not, potentially revealing just after dark movements telling you that you should move towards the bedding area to catch a buck during daylight.

By finding the main late season food source on your property, following these trail camera tips for the late season, and put together what you already know about a buck you can start gathering intel on a buck’s pattern before the temps get cold. Stay out of the food sources until those cold temps hit, and you have enough intel to make a move on a buck. As we progress through the late season remember these tips, and be careful not to over pressure your food source.

This is just the beginning of the late season, be sure to check back in each week for new relevant content! 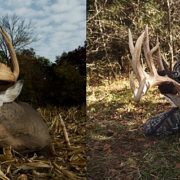 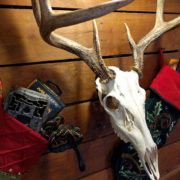 What Do Deer Eat During the Late Season?
Scroll to top