Depending on the strategies you employ and the locations you hunt, late-season hunting can be a hit or miss game. Hunting in December and January is all about striking when the time is right. Late season hunting is very similar to early season hunting in September or early October, where deer are primarily on a bed to feed pattern, and mostly in the afternoons. A stark difference from early season to late season is that deer are in survival mode come December and January. During the early season, deer are carefree, hitting green fields and enjoying the mild conditions while fattening up for autumn. Late season tends to be different. Bucks are worn down from the rut, possibly physically wounded, and desperately in need of high fat and carbohydrate foods to keep them going. Late season success will require knowledge of hunting pressure, food sources, weather patterns, and necessary gear to stay on stand during frigid conditions.

Hunting pressure is seen as a dirty word, but without it, you wouldn’t be able to see deer. If you deer hunt, you pressure deer—end of story. When it comes to late season hunting, you should first evaluate the pressure your property has seen throughout the prior months. In high-pressure gun hunting states like Wisconsin, Michigan, and Pennsylvania—it might be best to give your property a little break before jumping back in the tree expecting late season movement on open food sources. Of course, there are always exceptions, and maybe you have a very low-pressure property in one of those states. The key with hunting pressure is to understand how much you and surrounding landowners pressured the land you hunt, and evaluate your late season strategies from there. You cannot expect to see great late season movement if you bow hunt your property hard during the rut, then have family out and about rifle hunting with you during firearms season. Mature bucks will not likely leave your property if you still have food sources around, but they will move less often due to hunting pressure and the fact that they need to recover from the rut.

Know the hunting pressure you’ve applied to your land, and pump the breaks a little bit if need be. Patiently waiting for true late season bed to feed patterns to take place is a better strategy than guessing. Use your trail cameras during the period after rifle seasons as well, this will help you gauge deer movement. If you have the food, you will have the deer—pretty simple. This is especially true in the late season as bucks are trying to gain back the weight they lost during the rut. Bucks will be in search of high carbohydrate and high fat food sources such as standing soybeans and corn. In the areas I hunt, corn is king during brutal winter temperatures. I find that deer crave soybeans and corn during cold temps, but corn usually wins out. Even the biggest bucks in your area may throw caution to the wayside during frigid temps and make an appearance on big crop fields.

The green food plot you saw so many mature deer on during September and October may be covered in snow during this time period. It also could be bare ground and you might be wondering why your clover, brassica, or winter wheat field isn’t seeing any deer. It all revolves around what deer need to survive. By mid-winter, green food sources usually aren’t supplying what deer need—unless it’s the only good food in the neighborhood. You may find deer hitting green food sources again when temperatures warm up, but don’t count on seeing many deer on your green plots if they aren’t tucked away next to areas of high cover, or a south-facing hill. In most cases, deer would prefer corn or soybeans to a green food plot during cold winter months. However, never say ‘always’ in deer hunting—find what works in your area and plan your late season hunting around it.

Weather patterns play a crucial role in late season hunting. Weather dictates deer movement during each phase of the season to some extent. Late season is unique in that cold and warm fronts can get the deer moving, but it all depends on the previous few days of weather. For example, if the temperature has been 40 for around three to four days straight, and then the bottom drops out and the next days high is going to be 17 degrees and clear, it will probably enhance deer movement and could get your target buck up and moving. The opposite is sometimes true during late season as well. If there have been multiple days, or even a week of extremely cold weather, warming temperatures sometimes bring good movement as well. During these warmer temps or ‘breaks’ from the freezing cold, deer take this as an opportunity to sort of ‘stretch out’ and move around, much like humans would during a break from the cold weather. Pay close attention to trail cameras this time of year to gain knowledge of weather fronts and how it affects deer movement in your area.

Late season hunters understand that clothing and gear are crucial to late season success. Although you probably aren’t logging more than 3-4 hours for each late season hunt, you still allow yourself to get cold unless you prepare. To bear the cold weather, preparing for a late season buck hunt might require you to set up a Muddy ground blind or box blind weeks in advance. Proper layering is key for being able to stay out in the elements for as long as possible. Be sure to pack a head cover, neck gaiter, and gloves—there is nothing worse than your extremities being exposed to wind and cold air. As temperatures dip below freezing, or even below zero, you will be glad you prepared and had the necessary gear to make it through your late season quests.

Late season is all about keeping tabs on the pulse of deer activity in your area. Understand the above factors and you will give yourself the best chance for success. Knowing when to strike, and when to sit back, is critical for dealing with highly pressured deer around their coveted food sources. Be adaptable and mobile to position yourself for your opportunity. How to Plant a Hunting Plot for Bow Hunting Deer 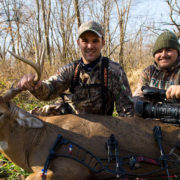